Last year, the OMB kicked off its first National Anti-Piracy Month by launching its #NgayonNa and #OMBeOriginal Campaign to spread awareness of its anti-piracy initiative, with renowned actor Piolo Pascual as OMB’s first anti-piracy ambassador.

This year, the agency is set to intensify its anti-piracy campaign with more programs in line with OMB’s celebration of National Anti-Piracy Month, with the theme “Focusing on Strategies that Work: Integrating Technology and Consumerism.”

Part of this month’s celebration is OMB’s second Anti-Media Piracy Summit that will focus on strengthening Intellectual Property (IP) Protection. The summit will tackle new approaches in IP protection including its implementation and enforcement of strategies with the use of new technology. The summit also aims to identify new trends of media piracy with the help of other organizations advocating anti-media piracy.

Last year, the OMB held its first Anti-Media Piracy Summit which had more than 300 participants in attendance, including the members of the academe, local government agencies and offices such as the Presidential Communication Operations Office (PCOO), National Bureau of Investigation (NBI), Film Development Council of the Philippines (FDCP), and the Intellectual Property Office of the Philippines (IPOPHL), private corporations such as Globe Telecom, and international government agencies such as the Korean Copyright Commission, Malaysian Ministry of Domestic Trade and Consumer Affairs, and the US Department of Homeland Security.

OMB will also hold its second Great Debate on Intellectual Property on October 11 at the Angeles University Foundation in Angeles City, Pampanga. The discourse aims to address the issues and concerns regarding IP law and how it affects the economy of Third World countries such as the Philippines. Students from Bulacan State University College of Law and Tarlac State University School of Law will be this year’s participants.

The OMB aims to be more visible by launching awareness campaigns with tenants of SM Cyberzone for them to better understand policies and regulations of the agency.

Since January 1 up to September 15 of this year, OMB has conducted a total of 140 anti-piracy operations that resulted in the seizure of 428,505 optical media with an estimated value of P219-M. 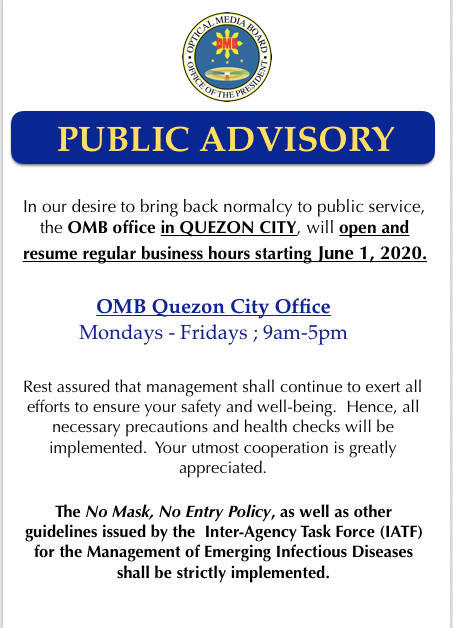